When you book with an account, you will be able to track your payment status, track the confirmation and you can also rate the tour after you finished the tour.
Sign Up
1734

The route passes in the northern part of Georgia, in the central part of the South Caucasus. The departure from Tbilisi is the second day of the tour and the first stop is in Roshka village.

3 meals a day
Nights are spent in sleeping bags, in tents. 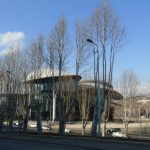